Bilal Ibn Rabah Al-Habashi
Bilal ibn Rabah[1] (Arabic: بلال بن رباح‎) or Bilal al-Habashi was an Ethiopian[2] born in Mecca in the late 6th century, sometime between 578 and 582.
Bilal Ibn Rabah, was an emancipated slave of key importance in Islam. He is said to have been one of the most trusted and loyal Sahabah (companion) of Muhammad and of Ali. His respected stature during the birth of Islam is often cited by Muslims as evidence of the importance of pluralism and racial equality in the foundations of the religion.
The Islamic prophet Muhammad chose a former African slave Bilal as his muezzin, effectively making him the first muezzin of the Islamic faith.[3] He was among the slaves freed by Abu Bakr (see Muhammad's views on slavery) and was known for his beautiful voice with which he called people to their prayers. His name can also be known as, "Bilal ibn Riyah" or "ibn Rabah" and he is sometimes known as "Bilal al-Habashi" or "Bilal the one from Habesha (today's Ethiopia)".[2] He died sometime between 638 to 642, when he was just over sixty years old.
According to Ibn Ishaq, Abdullah Ibn Zaid Ibn Abd Rabbihi went to Muhammad with his story that he saw Adhan in his dream, Muhammad, approving the method for calling to prayers, told him to ask an Ethiopian named Bilal, who had a marvelous voice, to call the Muslims to prayer (the Adhan). As Ibn Ishaq told the story (in Albert Guillaume's translation):
When the Apostle was told of this he said that it was a true vision if God so willed it, and that he should go to Bilal and communicate it to him so that he might call to prayer thus, for he had a more penetrating voice. When Bilal acted as muezzin, Umar I, who later became the second caliph, heard him in his house and came to the Apostle... saying that he had seen precisely the same vision. The Apostle said 'God be praised for that!'
Though slightly different versions of the story exist, all agree that Islam's first muezzin was Bilal.
One version states that one of the slaves of Umayyah ibn Khalaf, a terrible foe of Islam and Muhammad, was named Bilal. Bilal learned about Muhammad and his teachings and became Muslim, but kept his belief in secret. However, his master Umayyah came to know that he had opted to be a Muslim. So he started punishing him. He ordered his slaves to make him lay on the hot sand and put heavy stones on his body so that he could not move. After such punishments, news of this slave reached some of Muhammad's companions who told Muhammad of the slave. Muhammad then sent Abu Baker. Muhammad later learned of Bilal's unique way of praying and unique voice with which he spoke from the soul and as a result of this Bilal became the first muezzin.
Later on, some people suggested that this honor should be given to someone else, because Bilal could not pronounce the Arabic letter 'sheen' properly and instead used the letter 'seen' (the two sounds had merged in "s" in classical Ge'ez). It is reported that Muhammad said, "The 'seen' of Bilal is 'sheen' in the hearing of God," meaning that God does not see the physical manifestation; He appreciates the purity of heart. This saying of Muhammad is held to be contentious by scholars of hadith, with almost all of them grading it as baseless.[4] Bilal felt deep love for Muhammad, and he is quoted as reciting some lines of poetry in his own language, in praise of Muhammad. One verse translated:
"When noble traits are described in our country, thou art pointed out as a model among us."

Migration
In 622, the year of the Hijra, Bilal migrated to Medina and over the next decade accompanied Muhammad on all his military expeditions, and according to Islamic tradition, a lawyer revered by Muslims for his majestically sonorous renditions of the adhan. Bilal also carried Muhammad's spear, which was used from 624 onward to point the direction of prayer.
He fought in the Battle of Badr, in the aftermath of which he killed his former master, Umayyah ibn Khalaf, in spite of the protestation of Umayyah's capturer and long-time friend Abdur Rahman bin Awf. Bilal was also present in all of the major events and battles, including the battles of Uhud and Battle of the Trench.
Bilal's finest hour came in January 630, on an occasion regarded as one of the most hallowed moments in Islamic history. After the Muslim forces had captured Mecca, Muhammad's muezzin ascended to the top of the Kaaba to call the believers to prayer, - the first time the call to prayer was heard within Islam's holiest city, however this was never proven and many dispute the fact that it would be against the faith to actually have climbed the Kaaba, no matter how big the conquest.

After Muhammad (SAWW)
There are contradictory reports about what happened to Bilal after the death of Muhammad in 632. What seems clear is that at some point Bilal accompanied the Muslim armies to Syria.
After the death of Muhammed, Usama ibn Zayd continued a military expedition to Syria, as commanded by Muhammad. However, it is very uncertain if that is the army Bilal accompanied.

Sunni view
Sunni authors says that after Muhammad's death, Bilal never called Adhan. But when Caliph Umar visited Jerusalem, other Sahaba quested Umar to ask Bilal for one more last Adhan, and when Bilal did it, It was a very emotional moment for all of the Sahaba.[5]
Bilals grave is now in the outskirts of Amman, Jordan, in a village called Bader. There is also another tomb in Damascus believed to be his. 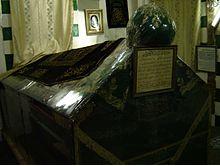 Legacy
If there is some disagreement concerning the hard facts of Bilal's life and death, his importance on a number of levels is incontestable. Muezzin guilds, especially those in Turkey and Africa, have traditionally venerated the original practitioner of their noble profession, and African Muslims as a whole feel a special closeness and kinship to him; he was an Ethiopian, after all, who had been exceptionally close to Muhammad, and is a model of steadfastness and devotion to the faith. The story of Bilal, in fact, remains the classic and most frequently cited demonstration that in Muhammad's eyes, the measure of a man was neither nationality nor social status nor race, but piety.
Bilal was devoted to the Ahl al-Bayt and used to publicly show his support for them.
The Imam Ja'far al-Sadiq is recorded as having said, "May God bless Bilal! He loved us, the family of Muhammad, and was one of the most pious servants of God."

Shi'a view
Ali Asgher Razwy, 20th Shi'a Twelver states:
If anyone wishes to see the real spirit of Islam, he will find it, not in the deeds of the nouveaux riches of Medina, but in the life, character and deeds of such companions of the Apostle of God as Ali ibn Abi Talib, Salman the Persian, Abu Dharr el-Ghiffari, Ammar ibn Yasir, Owais Qarni and Bilal. The orientalists will change their assessment of the spirit of Islam if they contemplate it in the austere, pure and sanctified lives of these latter companions.[7]

Sunni views
Edward Wilmot Blyden, himself a black man and former slave, wrote in 1874:
The eloquent Adzan or Call to Prayer, which to this day summons at the same hours millions of the human race to their devotions, was first uttered by a Negro, Bilal by name, whom Mohammed, in obedience to a dream, appointed the first Muezzin or Crier. And it has been remarked that even Alexander the Great is in Asia an unknown personage by the side of this honoured Negro.[8]